Knights win back-to-back for the first time in 3 years.

COLMAR, PA -Although we're now into the regular season, this was the second meeting between the Knights and Bucks in 2022, as they recently played each other in the preseason. However, the result would end up the same with the Knights on top at the end of the game.

The first period was all Knights firing 14 shots on the Bucks goalie. The highlight of the period came with forty-four seconds left to play. Knights forward Nolan Shingle got behind the Bucks defense and went in solo firing a wrist shot glove side high which Liam Rogers snared, great plays were made on both sides of the puck. The period ended with the Knights holding a 14-5 shot advantage.

Less than one minute into the second period, North Penn opened the scoring on a power play. On a rebound after a shot that clanked off of the Bucks post, John Stinson dropped down from the point and pushed the puck back behind the CB West goal line. Derek DeLong picked up the puck and saw an opening as there were no Bucks defenders challenging him. DeLong coasted to the front of the net and put the puck behind goalie Liam Rogers to take a 1-0 lead. At 13:44 Jimmy Boyle picked up a head of steam as he pushed up ice out of his defensive zone. Boyle dished to Joey Silvotti who found John Stinson alone in front of the Bucks Net. Stinson quickly popped the puck in to take a 2-0 lead. The Bucks got into the mix at 8:04 when Luke Tremmel picked up a loose puck from behind the Knights net. Tremmel threw the puck into the slot where Adam Ricci picked it up and slid it past the North Penn goalie to cut the Knights lead in half at 2-1. The score remained the same as they headed into the third period with the Knights holding a 32-12 shot advantage.

The game was held in check throughout the third until Nolan Shingle made a brilliant pass flipping the puck over the Bucks defender on the breakout from his own defensive zone. Shingle hit John Stinson in stride on a breakaway, as the Bucks goalie came out to challenge, Stinson faked right and went left putting the puck into the wide-open net opening the score to a 3-1 Knights lead with 3:58 remaining. With fifty-two seconds left to play the Bucks pulled their goalie to try and mount a comeback. However, Derek DeLong would end that effort as he intercepted an errant CB West clearing pass in their own zone, tossing the puck into the open goal closing the game out 4-1. The Knights finished on top with an overwhelming 45-19 shot advantage. The Knights smothering offensive attack, brilliant defensive efforts, and formidable goaltending held their opponent to under 25 shots in back-to-back games.


Knights Seek Redemption Against Bensalem In First Away Game 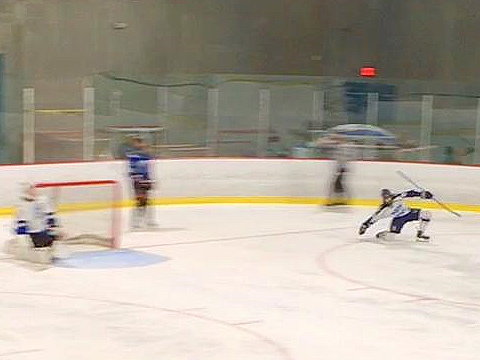 BRISTOL, PA -Wednesday evening North Penn faced off against the Bensalem Owls, who, (no pun intended) thrashed the Knights last season in a 5-1 drubbing, however, this time around wouldn't be so easy. The Knights defense have been playing strong, "concept first" hockey keeping it simple applying consistent pressure while moving the puck and pushing the play up ice. Passing still seems to be a bit of concern on the offensive end but they're producing and doing their part on the back check. Nick Crist has been nothing short of outstanding in between the pipes.

North Penn got on the board first when Matt Yothers stripped the puck from Owls defender Alex Bazylevich. Yothers skated in from the right hash marks and went short side high on goalie, Ricky Gonzalez at 15:51. The Owls struck back at 11:43 when Alex Hood picked up a loose puck in front of goalie Nick Crist and tried twice unsuccessfully to beat the North Penn goalie but Hood won the battle on his third opportunity when he tucked the puck in from behind the net to tie the score at one apiece. At the 2:07 mark it appeared Julian Ma threw the puck away in his own zone, but the puck skipped past the Owls defenders springing undefended Matt Yothers on a breakaway. Yothers fired a shot through the five-hole stunning the Owls netminder who was visibly frustrated with his mistake. That would be Yother's second goal of the game putting the Knights ahead 2-1. The period ended with the Knights ahead and up 14-7 in shots.

It was a mostly uneventful second period as both teams tightened up on defense. At 7:27 Matt Yothers picked up the puck after a scrum behind the Owl's net and found Julian Ma wide open on the right side just outside the crease. Ma wasted no time with a one-timer he zipped past Gonzalez putting the Knights up 3-1. The period ended with the Knights on top 24-19 in shots.

In the third period, at the 11:12 mark, defenseman Jimmy Boyle found Nolan Shingle down the right-side boards in the Owl's neutral zone. Shingle drew the attention of two Owl's defenders and flipped the puck to a streaking Stinson who went in unimpeded and deposited the puck right side on Ricky Gonzalez to put the Knights ahead 4-1 which would also be the final score as the Knights beat the Owls finishing with a 38-23 shot total.

Overall the Knights are firing on all cylinders getting great defensive support from Sam Mostochuk, Tyler Porubski, Jimmy Boyle, Chase Kelly Del-Ricci, and Gabe Dunn. They've been nothing short of exceptional while keeping shots against below 30 compared to last season's average of more than 40 per game.