Panther's goalie Matthew Krem in action making a save against the Bensalem Owls in their first game of the season. 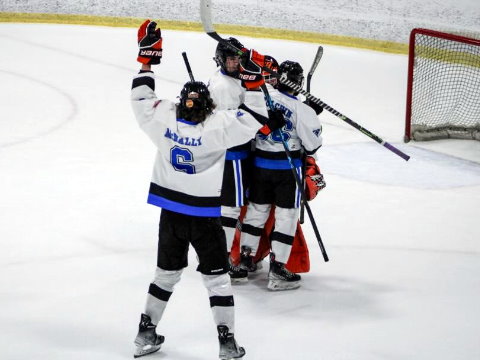 The Quakertown Panthers celebrate after their win.

COLMAR, PA -The Quakertown Panthers and Springfield Twp. Owls met for the first time in SHSHL action on Wednesday evening with the Panthers skating away with an 11-2 decision.

Panthers senior Jack Diliberto started the scoring off for the Panthers four minutes into the first period. Less than a minute later sophomore Branden McNally scored with Braden Bishop picking up the assist. Later sophomore Corbin Cassel picked up a goal assisted by senior William Shaw. It seemed like a wave with William Shaw getting on the board unassisted at 6:38 of the first to put the Panthers ahead 4-0. Branden McNally then scored his second goal of the game assisted by senior Lucas Cunnane. With the score 5-0, the Owls got into the scoring mix at 11:49 when Gavin McManus beat Panther's goalie Matthew Krem. McManus was assisted by Chris Cahill putting the Owls on the board, cutting the deficit to four. With five minutes left in the first period Branden McNally scored his third goal of the game unassisted. The Springfield Owls, Gabriel Wells scored with five seconds left in the first period making the score 6-2.