WARWICK, PA - The scene was the same, a sold-out Revolution Ice Gardens, and the teams were the same, the heavily favored Council Rock South Golden Hawks and the much-improved Council Rock North Indians, but something was different for this year's Rock Cup. The game lacked the intensity of past matchups with sloppy play by both teams. There were also several long stoppages that prevented emotion and momentum from building, and the officiating was inconsistent and questionable at best. In the end though, the result was the same as Hawks skated to a 4-0 victory on the back of goaltender Carson Lopez’s first shutout of the season.

Typically, in these rivalry/holiday games both teams come out flying, with end-to-end play and big hits, but not tonight. Both teams came out flat, each with multiple turnovers, and there were many stoppages that would slow the game down. The officials were out to show they weren’t letting anything go early in the game, making several penalty calls and giving each team a chance to get on the board on the power play, but neither could. In fact, the best scoring opportunity for either team came when North’s Karson Grainey got a great chance on Lopez shorthanded, Lopez being up to the task with a pad save. Toward the end of the first period South would pick up the pace and start to pepper Indians sophomore netkeeper Ian Goldberg. He would make some fantastic saves, including a highlight reel glove save during a South power play, but Blaize Pepe would finally open the scoring with a minute left in the first period. Pepe would take a defenseman wide with speed and, with the Indians player draped on his back and a delayed penalty called, cut towards the net and beat Goldberg to put the Hawks on the board with one minute left in the first period. That’s the way the period would end with the Hawks ahead in shots 14-5.

Bizarre officiating would continue into the second period as the officials seems confused at times, blowing quick whistles, finding themselves out of position and making some penalty calls that left the fans scratching their heads. Each team would have their fair share of power plays, including extended time and two-man advantages. During the latter, a Golden Hawks advantage, Grainey would slip behind the Hawks defense and go in alone on Lopez, Karson versus Carson. Grainey’s dazzling moves wouldn’t fool Lopez though as Carson would smother the puck and turn Karson away. Grainey would then take center stage in a different way as he and South’s Kevin Koles would bump and scrum at center ice. With the whistle blown and referee’s intervening, Grainey would get a quick punch in on Koles that everyone saw. After a lengthy delay, while the officials sorted things out, Grainey was given a five-minute major and game misconduct, ending his night and severely diminishing his team's chances of a comeback. However, this was a one goal game, and Council Rock North still had the talent to even things up, especially with Goldberg keeping them in it to this point. South was not showing the collective competence it had displayed in previous games, in fact they looked sloppy at times, and this was the slimmest of margins. That is until Jake Weiner would score on the major penalty power-play. Weiner would take a hard pass from the half-wall and manage to get off a quick shot from the slot. Before Goldberg could even react, the puck was behind him and the Golden Hawks had a two-goal lead heading into the third period, the shot difference widened at 26-7. 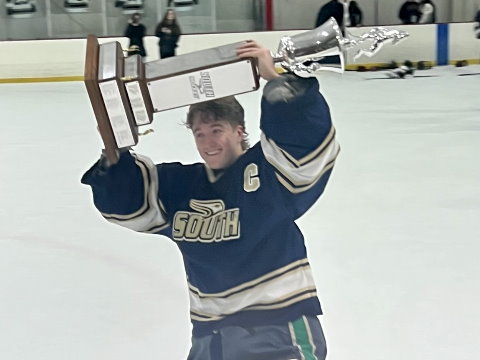 South's Lopez skates with the Harrington trophy after the game

Minus their best player, and down two goals, Council Rock North would give their best push in the third period, more than doubling their shot total of the previous two periods combined. However, they struggled to get sustained pressure in the South zone, and when they did Lopez, and the Hawks defense had the answer. The Indians would basically drive a stake in their own heart when Noah Epstein would take an inexcusable penalty in the offensive zone and get called for interference. Jimmy Diiulio would score a power play goal with a laser of a shot from the left circle and give the Hawks some breathing room. Their survival on the line, North would get an extended two-man power play advantage and get some quality chances, even ringing a shot off of the post, but Lopez again made timely saves. Jake Weiner would all but end the game with his second of the night and a 4-0 lead when North defenseman Jackson Accardi would turn the puck over at his offensive blue line, Weiner blocking his pass, the puck deflecting to center ice. Weiner would drive by Accardi and outrace Indians defenders, breaking in on Goldberg and beating him with a shot to the blocker side. North didn’t really put up a fight after that and the Golden Hawks would run out the final few minutes with ease. While many expected this game to be one-sided, Council Rock North showed their resilience, behind the great play of Goldberg, and kept this game close and entertaining. It just took a long time and a lot of patience from the fans to see Council Rock South skate with the Harrington trophy, champions of the Rock Cup once again.

3 Stars of the Game