COLMAR, PA - If you were looking for a non-stop action-packed hockey game, last night would've been your ticket. The Knights and Indians faced off for the second time this season after North Penn winning in preseason 4-1. Coach Uchiat and the Indians were definitely on the warpath looking to settle the score, and they came out on fire. If one didn't know any better, they may have been questioning themselves if they were watching a lacrosse game instead. By all accounts conventional wisdom would not lead you to believe this was the type of hockey either coach would consider normal.

Nolan Shingle got the game started on an innocent play at the North Penn defensive zone blue line. Shingle stole the puck on a fumbled play by an Indians defender. Shingle went in on a break and beat Noah Connor to go up 1-0. Ten seconds later Nick Smith picked up an unforced turnover in the neutral zone and skated into the offensive zone where he let fly a wrist shot beating Ian McAteer glove side high to even the score at one apiece. Smith struck again just over one minute later on a flip in from just below the hash marks on the right side of the North Penn goal, somehow it had eyes and found its way in putting the Indians up 2-1. The Knights would not counter and the score remained 2-1 heading into the second with Souderton holding a 10-7 shot advantage through one.

Things kind of spiral out of control in the second period as nine goals would be scored in a see-saw battle of turnovers resulting in goals back and forth. John Stinson picked up his first goal of the night on a rebound less than one minute into the second period inside the blue paint. Stinson stuffed the goal home to even the score at two. Drew Savarese scored on an ugly play off of a draw to the right of McAteer in the Knights defensive zone. Liam O'Neill won the draw cleanly, and nobody bothered to pick him up. He slid the puck through both NP defenders where Savarese stood alone and easily flipped the puck past a prone McAteer, the Indians were back up by one, 3-2. Not even thirty seconds later Nolan Shingle was back at it again flying through the neutral zone splitting the Indians defense for a one on none break. Shingle deeked left and slid the puck through Connor's legs going five-hole to even the score at three apiece. A minute and a half later Timmy Alexander picked up a shot wide by Matt Malanga off of the boards and lofted it towards the net from the left sideboards in the Knights zone and it somehow went in to put the Indians ahead 4-3. Seven seconds later off of the ensuing draw Nick Smith skated in across the Knights blueline and went top shelf on McAteer putting Souderton ahead by two extending their lead to 5-3. This would be the end of McAteer's night as Nick Crist was sent in for a North Penn goalie change. Play shifted back and forth for around 4 minutes when the Indians went on a power play. Matt Malanga shot wide from the point and Nick Smith picked up the errant puck unattended. With no defensive pressure applied Smith pulled off a Michigan, (video below) as he tucked back the puck top shelf behind Crist on the man advantage to take a commanding 6-3 lead.

Twenty seconds later Matt Yothers capitalized on a rebound off of the stick of Gabe Dunn to cut the Knights deficit to two at 6-4. The Knights picked up another penalty roughly three minutes later giving the Indians another man advantage. However, during the Souderton powerplay Joey Silvotti blocked a point shot off of the stick of Malanga and went in on a breakaway blasting a shot blocker side, Connor made the initial save but the rebound landed right on Stinson's blade and he made no mistake wristing the shot past Connor who hadn't any chance on the secondary opportunity. The goal closed the gap by one bringing the score to 6-5, Souderton advantage. 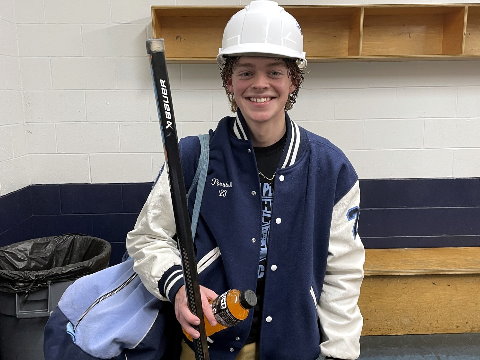 A minute and a half later the Knights, with continued pressure, broke into the Indians zone on a rush by Tyler Porubski. The puck bounced around the zone before an Indians defender picked up the loose disc and wrapped it around from behind his own goal to the right winger where Porubski applied a body check and stripped the Souderton forward handing off to Cole Pluck. Pluck danced around two Indians defenders before sliding the puck into the Souderton goal evening up the score at six apiece. The Knights mounted a three-goal comeback staving off the three-goal deficit. The period ended with Souderton holding a 1 shot advantage at 22-21.

As the back-and-forth craziness calmed down for the third both teams settled for a tie to send the game into overtime. At 2:39 of the extra period Tyler Porubski blocked a shot off of the stick of Seth Grossman before corralling and shifting back to the safety of his own goal. Porubski maneuvered to the right-side circle and whipped the puck up ice to John Stinson in full stride. Stinson beat the Indians defender and deeked out Souderton's goalie going glove side high for the OT win. The Knights staged a four-goal unanswered come back from mid second period on and beat Souderton 7-6. The final shot count was 33-31 Souderton.