Bensalem Owls celebrate their 6-3 win against the Pennridge Rams.

BRISTOL, PA - It was a big night for Alex Hood, and Danny Mackley as they teamed up to provide the majority of the offense for the Bensalem icemen. The Owls pulled off quite an accomplishment Thursday evening defeating the defending league champion Pennridge Rams, with only two lines, missing five players from their lineup Bensalem extinguished the Rams by a score of 6-3 with only 8 skaters and Ricky Gonzalez between the pipes. 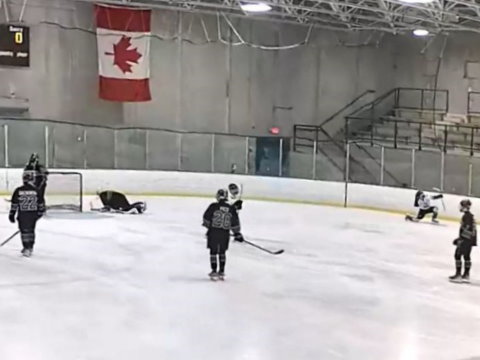 Alex Hood scores the first of his 3 goals against Pennridge

The Owls got on the board first with an extremely heavy forecheck in their offensive zone thirty-six seconds into the game. Alex Hood forced a turnover by Jared Garber from behind the Pennridge net which Alex Bazylevich picked up along the right-side boards. Bazylevich found a wide-open Lucas Gonzalez in front of the Rams net. Gonzalez put the puck away after 3 whacks at it to put the Owls up 1-0. The Owls struck again almost three minutes later after a defensive zone draw was lost but the Ram's Henry Fitzgerald threw a no look pass right to the stick of Alex Bazylevich at his defensive blueline. Bazylevich hit Alex Hood in stride, and he was off to the races. Hood went back hand on the Rams goalie as he dented the twine to put the Owls up 2-0 early in the first period. At 6:24 Rams defenseman Salvator Daquino gave away the puck on a bad clearing attempt right on the tape of Danny Mackley's blade and he would not make a mistake as he fired a laser top shelf blocker side and the Owls looked like they were going to run away with the game. However, Pennridge got on the board with just over three mins remaining and the first period ended 3-1 in Bensalem's favor.

Even with a short bench the Owls were dominating the game skating hard and putting pressure on the Rams at every turn. Two minutes into the second period Mackley lit the lamp again after a right-side offensive draw. Mackley wound up picking up the trash whacking away until the puck crossed the line to give the Owls a commanding 4-1 lead. With around seven and a half remaining in the second period Colin Dachowski got away from his check along his defensive neutral zone boards and skated down the left side getting a shot off that beat Gonzalez to close the gap to 4-2. Alex Hood picked up his second goal of the game when he was left all alone below the left side circle in the offensive zone. With no pressure Hood walked in and fired the puck past the abandoned Rams goal tender. The score settled at 5-2 to end the second period.

The Rams tacked on another goal with 6:50 remaining in the third but the damage was done, and the gap was too wide for Pennridge to close. Hood picked up his third of the night with four seconds remaining to complete the hattrick. The shorthanded Owls dominated the Ram's the entire game, on both sides of the puck outskating, and outhustling them in each period to earn the well-deserved win, Ricky Gonzalez was stellar in goal.