Council Rock South Gets Team Effort and Continues to Roll

Council Rock South Gets Team Effort and Continues to Roll

BRISTOL, PA - You want to put a scare into Council Rock South fans? Take away all-stars and co-captains Carson Lopez and Kevin Koles (both ill) for a rubber match game against the Council Rock North Indians. Fortunately, North was missing their MVP Karson Grainey, due to his antics in the Rock Cup in which North showed they still had enough talent to challenge South. Both teams would need a team effort in order to secure a win Wednesday night, and both teams would get just that, until the third period when South would pull away. Trevor Rakszawski would get his first varsity start for the Golden Hawks, and he would put the nerves to rest by holding North scoreless in the opening frame. For South it was Blaize Pepe who would open the scoring with a great shot after an even better keep at the blue line by Jimmy Diiulio. Diiulio was able to corral the bouncing puck and get a quick pass to Pepe just over four minutes into the game. Teams would trade opportunities for a bit before freshman phenom Jake Weiner would drive the net and create a rebound that line mate Jeremy Rayher poked home for a 2-0 lead. That’s how the period would end, and although South had a bit more sustained offensive zone pressure, North had their chances, and it was anyone’s game at this point.

The Indians would make that point just three minutes into the second period when North’s Lucas Siomos took advantage of some lazy defensive play by the Golden Hawks and banged in a rebound off of the pad of Rakszawski to close the gap to one. Continued strong play from North goalkeeper Ian Goldberg would keep the game interesting as South ramped up the offense, but Gavin Nisenzon would restore Souths two-goal lead, finally putting the puck past Goldberg after a mad net-mouth scramble. The Golden Hawks were tilting the ice a bit, but Goldberg was keeping his team within reach and a victory was still within North’s grasp. 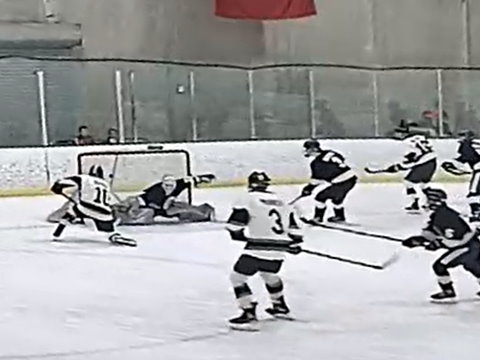 The third period would be a wild one with scoring, hitting and some great goaltending by both teams. The Indians made a bad turnover at their blue line and the puck bounced back into their zone and right onto the stick of South’s Jeremy Rayher. Rayher skated in two-on-one with Weiner who would finish a nice pass with a tap-in goal just under a minute into the period. With a seemingly comfortable three goal lead, the Golden Hawks again became complacent, and North’s Nicholas Hahn would take full advantage when he and Jackson Accardi put on a show. After a puck exchange in their own zone, Accardi skated the length of the ice unchallenged, with Hahn not far behind, a classic case of puck watching by the Golden Hawks. Skating below the goal line, Accardi threw a quick pass through the slot to a wide-open Hahn for a one-timer to give the Indians some hope and make it a two-goal game. That hope was quickly squashed when Jimmy Diiulio walked out of the offensive left corner and slid a shot along the ice, far-side on Goldberg. Two minutes later, Peter Pereborow would sling a shot from the high slot towards Goldberg that found its way into the net because of a great screen in front of the Indians netminder, and the rout was on. Play became fairly one-sided for the remainder of the game, with North having lost their desire and South smelling blood, but the hitting noticeably picked up and things got a bit chippy. The scoring for South continued as Nisenzon, Pepe and Chase Tovsky took advantage of the Indians apathy with a beautiful tic-tac-toe passing play that Nisenzon finished for a power-play goal and a 7-2 South Lead. Bobby Gilbert rounded out the scoring at 8-2, with under a minute left, and the game ended without any major scrums.

Going into the game one might have thought the Golden Hawks streak could come to an end, but with North missing Grainey, and solid team play from all lines, South was able to hold off the Indians and win by a larger margin than last game. If someone were to look at the score, they would think the game was a blowout, but, through two periods, North stayed in it and gave themselves a chance. South faces their biggest test next week as they face the SHSHL, Flyers Cup and state champion Pennridge Rams, Council Rock being the Rams victims in the first two championships. Koles and Lopez are expected to return, but team play like they got against Council Rock North will be required if the Golden Hawks are to claim themselves as true front-runners by beating Pennridge.

3 Stars of the Game