Falcons and Redskins duke it out in SHSHL showdown

Falcons and Redskins duke it out in SHSHL showdown

It's a packed house at Grundy Arena to watch the Pennsbury Falcons and Neshaminy Redskins on Wednesday night.

BRISTOL, PA - Quite possibly the Suburban leagues most storied, and longest standing rivalry going back to the now defunct LBCSHL, (Lower Bucks County Scholastic Hockey League) days, the Neshaminy Redskins and Pennsbury Falcons feud goes back decades. One of the best rivalries in the SHSHL to this day, and the funny thing is, it's just as strong today as it was thirty years ago.

The Pennsbury Falcons and Neshaminy Redskins faced off for the second and final time in the 2022-23 regular season. The Falcons, on the prowl looking for redemption after losing the "Gannon Cup" on November 23rd, were out to settle the score against their long standing foe. It was blackout night for the Falcons, and white out night for the Redskins as both teams student sections packed the house to take in the game of the week. 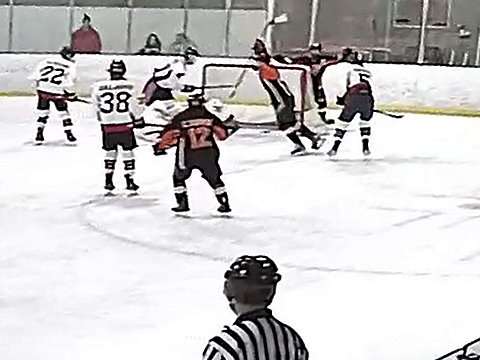 Logan Doyle scores as Pennsbury runs away with the game.

Andrew Falkenstein lit the lamp first for the Falcons on a brilliant give and go play with Chris Sarver. Brendan Macainsh picked up the loose puck after a broken play by Neshaminy's Nolan Geria deteriorated when he entered the Falcons defensive zone. Macainsh dished to Falkenstein who fed Sarver in stride. Sarver skated down the left side boards and found Falkenstein all alone in the slot. Falkenstein deposited the puck long side on Neshaminy's goalie, Cory Hemberger to put Pennsbury up 1-0. It would be Sarver creating opportunity again with practically the same play a little over two minutes later, as he came down the left side boards in the Neshaminy zone. Sarver looped down behind the Redskins net and found Brendan Macainsh wide open in the slot. Macainsh wasted no time burying the puck in behind Hemberger to widen the Falcons lead to 2-0. It was Sarver and Macainsh again with just under three minutes remaining as they came together to set up Logan Doyle in front of the Redskins crease. Doyle picked up the feed from Macainsh and back handed the puck past the down and out Hemberger widening the gap to 3-0.

The second period was kind of crazy to say the least, exclusively from a reffing perspective. With a bit of wild west feel there were fourteen penalties called, eight of which were called on two players from each team at around twelve minutes. But to the players defense, the refs went a little overboard calling both for headshots. Neither player touched each other in the head. Whatever the case the game was pretty much all Falcons, as they controlled play from the initial drop of the puck until the final buzzer. Both teams added two goals apiece over the final two periods, and the Pennsbury Falcons laid claim as victor when all was said and done. The Falcons defeated the Redskins by a final score of 5-2 thus splitting the regular season series at one win each.