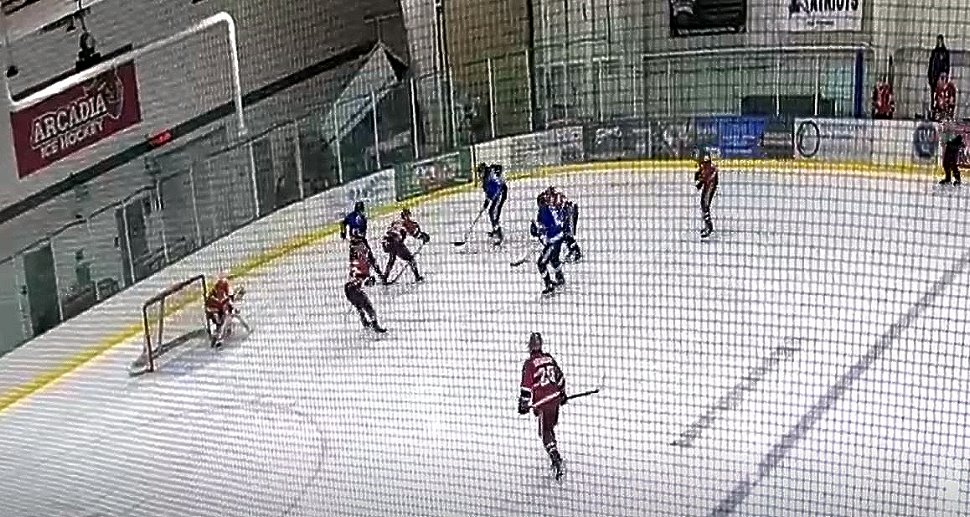 Friday night "Ice", the Panthers won 5-2 against the Colonials.

COLMAR, PA - When second place Plymouth-Whitemarsh came to the rink on Friday night they weren't expecting much if any resistance from the fourth place Quakertown Panthers. However, the Panthers had different reservations and from the crease out to the ice, Quakertown's icers put on a performance which left the Colonials stunned. In the standings the two teams sit in different positions but on paper they both have the skill on the ice to compete against any team in the league.

The Panthers struck first just forty-five seconds in, when off of a left side offensive zone draw, Cole Slemmer picked up the loose disc and fired it past the Colonials goaltender, Christopher Maslij. Josh Tolchin won the draw and tied up his man giving Slemmer the opportunity to sweep in and fire the puck in for a 1-0 lead. Over the first ten minutes of the game the Panthers squad held the potent Colonial offense to zero shots. Over the last seven minutes of the period however, Matthew Krem saw 8 shots fired at him and stopped them all to end the first with a one to nothing lead.

The second period was played much less conservatively with both teams running and gunning trading goals back and forth. Much like the first period, the second period began with a goal practically right off of the opening draw when Will Shaw picked up the puck in his defensive neutral zone and skated in around a Colonial defender backhanding a shot past the surprised PW goalie to take a 2-0 lead. Cole Slemmer picked up his second goal of the night whipping a wrist shot glove side low in the slot off of a brilliant feed from Branden McNally along the right-side boards. Slemmer's goal put the Panthers up 3-0 and it looked like they were going to run away with the game. But Plymouth-Whitemarsh came right back a minute later when David Branigan broke free and picked up a defensive zone clear to go in on a clean breakaway beating Matthew krem to put the Colonials on the board and cutting the Panther lead to 3-1. PW made a game of it three minutes later, shorthanded, Jake Elgart picked up a pass out in front of the of the Quakertown net and stuffed it past Krem to make it a 3-2 game. Will Shaw rained on the Colonials parade with little more than two minutes left to play in the second. The Panthers picked up a power play on a Colonial tripping call. Immediately following the call, off of a right-side offensive zone draw, Shaw fired a laser beam from the point beating Maslij to double up the score, 4-2. That was all the Panthers offense would need for the remainder of the game, but Shaw still had unfinished business. With one minute left and an open net, Shaw fired the puck from his defensive zone and scored to complete the hat trick. The final score was 5-2 Panthers.

Will Shaw scores on the empty net for his third goal of the game.