Two generations of brothers and one interesting common trait, the Flyers Cup! 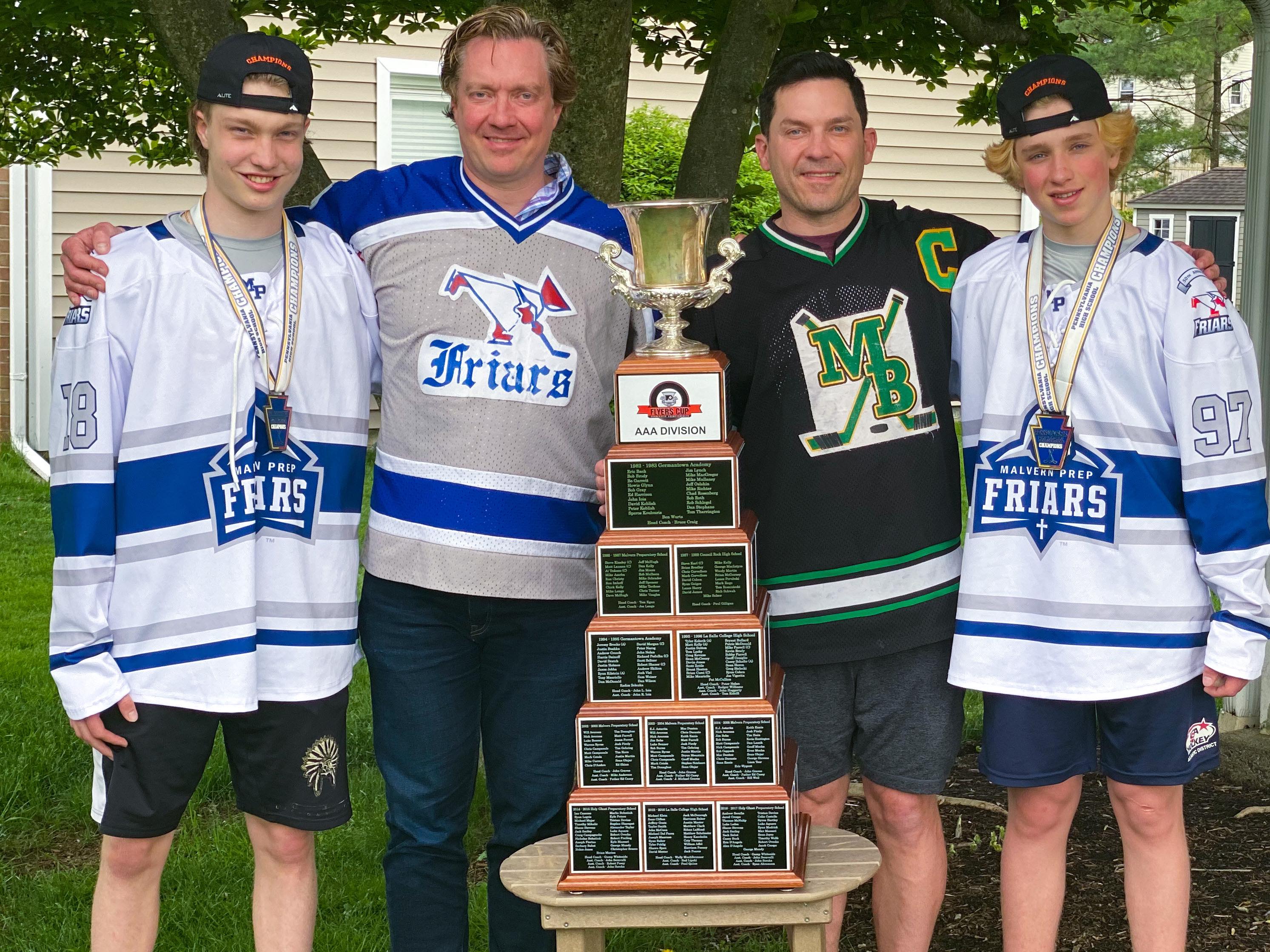 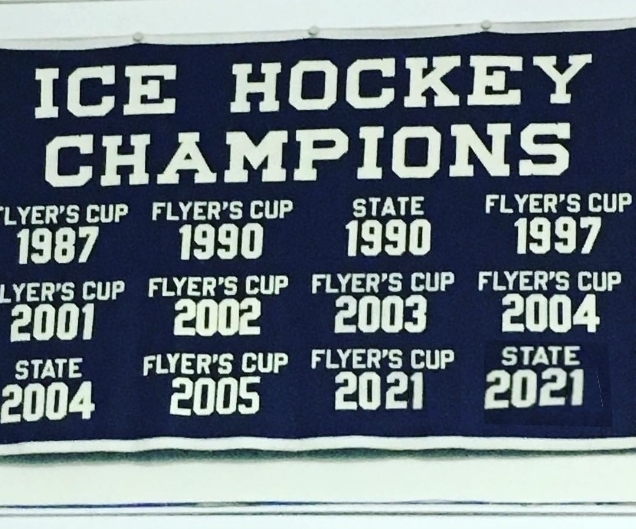 Friars ice hockey championships
MALVERN, PA. Just off of the Mainline, tucked back in the wooded, and pisturesque rolling fields of Malvern, PA. you will find a moderately sized but very well known catholic educational institution, aptly known as Malvern Preparatory School, home of the "Friars".

A school well known for its educational merit but equally as much for its boy's ice hockey program a program rich with winning history. On-campus you'll find a banner that proudly heralds the varsity ice hockey program's 10 Flyers Cup, and 3 state championships over almost 35 years

The Malvern Prep Friars, well versed in Flyers Cup Tournament gameplay were fresh off of a stunning 1989 semi-final defeat to the William Tennent Panthers who ultimately won the Flyers Cup Championship over the Conestoga Pioneers. Heading into the 89-90 campaign the Friars returned to regular-season gameplay with virtually their entire roster still intact from the previous season. Unfortunately for the rest of the Delaware Valley High School Hockey leagues, the Friars squad looked to avenge the previous season's early Flyers Cup exit. Malvern tore through the regular season schedule and into the Flyers Cup Tournament in convincing fashion. Malverns closest adversary was Monsignor Bonner and went 1 and 1 against in Flyers cup preliminary action losing their first game 1-0 and winning the second meeting 3-2 which coincidentally would send them into the semi-finals against Central Bucks East. Bonner went on to lose against William Tennent in semi-final play. The Friars dismantled the Blazers in the semi-finals with a score of 9-3 setting the stage for a return to play against William Tennent but this time in the Championship round. This game turned out much differently than their last meeting in the 1989 semi-finals as the Friars beat the Panthers convincingly in an 11-2 route controlled entirely by the Malvern Squad. Malvern continued their push into the Pennsylvania State Cup High School Hockey Championship matched up against the cross-state Penguins Cup Champion Upper St. Clair Panthers. Upper St. Clair started the scoring early but the Friars would strike back with 4 unanswered goals, 1 by Ben Coia to tie the game and 3 straight by Keith Grimley breaking the game wide open to a 4-1 lead. The Panthers added a pair of goals to close the Friar lead to 1 but Keith Haig scored again to put the Friars up for good with a 2 goal lead and just over 5 1/2 mins remaining. Grimley scored an open net goal to finish the game giving the Friars the 6-3 win and their first State Championship for Malvern Prep in any sport in school history. 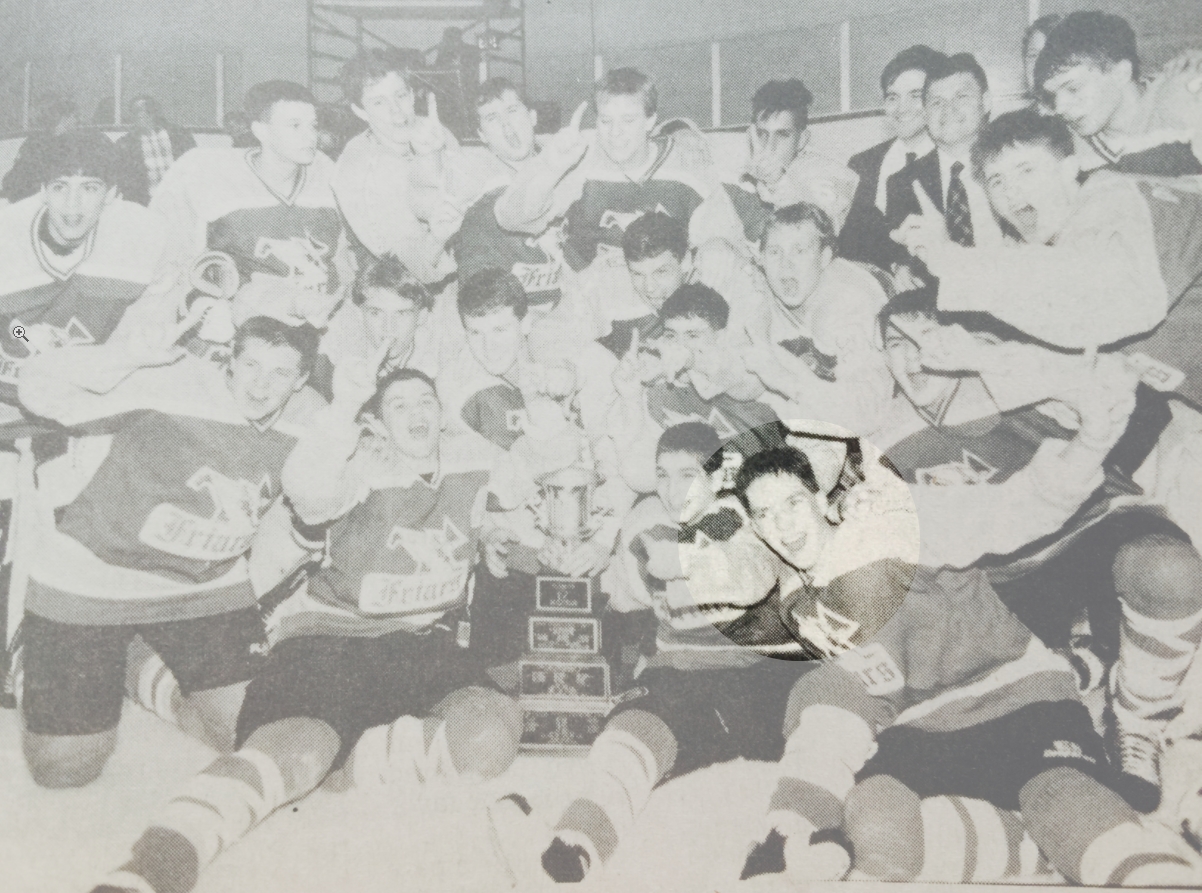 The rise of the Monsignor Bonner Friars took center stage in 1992. The Friars were the #1 seed representing the EHSHL set to compete for the Flyers Cup Championship against The William Tennent Panthers. William Tennent found themselves returning to the Flyers Cup Tournament as the SHSHL #1 seed after stunning the Council Rock Indians in the best of 3 series 2 games to 1 for the SHSHL championship, they knocked CR out of AAA contention and into the AA bracket, earning their spot to compete for the AAA Flyers Cup title. The Friars and Panthers entered the best of three series similarly after beating their semi-final opponents with almost the exact same scores. The Friars beat Unionville 7-1, and the Panthers beat Archbishop Ryan 7-2 providing both teams their tickets to advance to the Flyers Cup Championship. Bonner opened the series with a 3-1 win, moving to game two Bonner put the pedal down and beat William Tennent 6-1 securing their school's first AAA Flyers Cup Championship in team history. The Friars moved on to take on the Meadville Bulldogs at the Igloo in Pittsburgh for the Pennsylvania State Cup High School Championship a week later. Unfortunately, the game ended in a Meadville win but the Bonner players skated away with a feather in their caps as the first Varsity ice hockey team to earn the title Flyers Cup Champions. Bonner would return for the 93 season and repeat as the AAA Flyers Cup Champions, although they would meet Meadville again with the same result in the State title game the 1992 and 1993 Monsignor Bonner teams sit alone as the only back-to-back, and AAA Flyers Cup champions in the school's history. Michael Jacobs played on both teams during his High School ice hockey career.

Over 15 years later the Flyers Cup returns to Malvern, and another generation of Jacobs' players carry the trophy 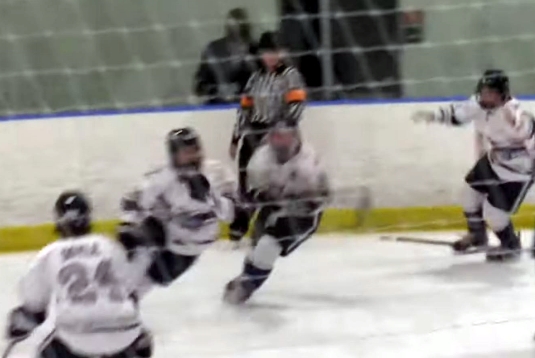 Jimmy Jacobs scores the overtime winner
The 2020-2021 High School Ice Hockey season could only be recognized as being overtly extraordinary. After the 2019-2020 Flyers Cup Tournament was truncated due to precautionary measures in light of the Coronavirus scare, the following season could only be thought of as a long shot to play at best. Because of the extenuating circumstances and decisions being made at the state and county level, the 20-21 seasons for the various southeastern Pennsylvania High School Ice Hockey leagues were in jeopardy of starting off normal or being played at all. In the end, the decision was made by the APAC to proceed with a condensed schedule which wound up being 9 regular-season games. Malvern Prep ended their season with only 1 loss and a 5-1-3, (OT Win) record, the one and the only blemish was against LaSalle, losing 5-2. The Friars opened quarter-final play with a 4-0 win over Salesianum moving them into the semi-finals against St. Joe's Prep. The Friars beat the Hawks with a 4-2 win to catapult them into the Flyers Cup Championship against LaSalle. Would you have it any other way? The league's top two teams faced off in what would be a fierce battle, tied 3-3 after regulation a decision would have to be made in overtime. Overtime was decided on a Jimmy Jacobs stuffer 3:47 in and returned Malvern back to Flyers Cup Champions for the first time since 2005. 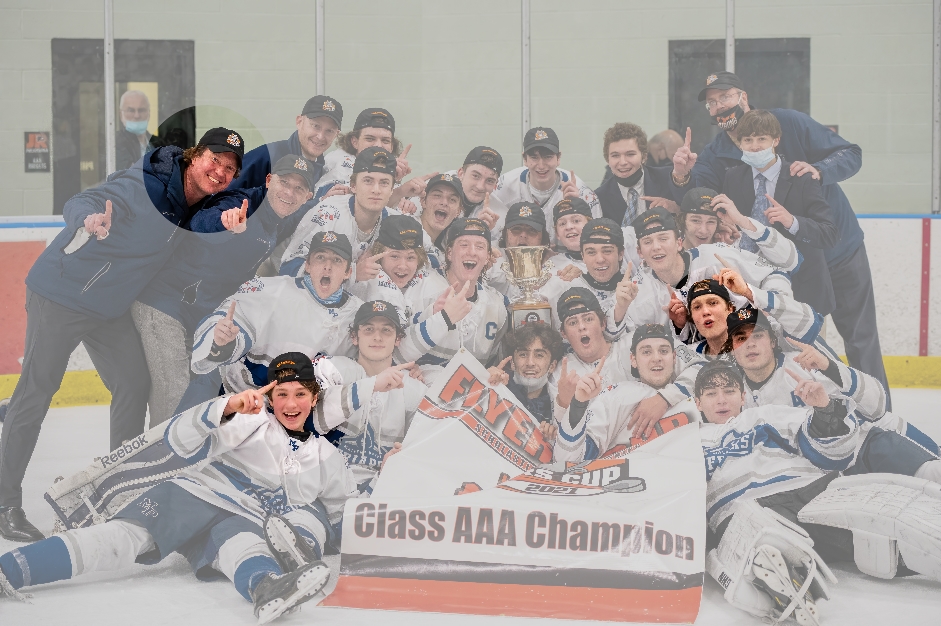 Onto States
Almost two decades later and the dynamic duo return to the campus of Malvern Prep to sit in distinguished honor. The Flyers Cup and the Pennsylvania State Cup Championship trophies will grace the school's trophy case once again. 16 years ago was the last time Malvern won both AAA championships. The only other time was 31 years ago when Jim Jacobs, father of current Malvern players, Jimmy, and Jeremy also won the tandem awards in 1990.
The current Friars team won the State Cup in a game played against Penguins Cup Champions North Allegheny Tigers. The similarities between the 1990 and 2021 championship games are strikingly familiar. Both father and son's teams got off to a shaky start, both were scored on early but the overall strength and depth of the Friars squad quickly turned the game around completely in their favor scoring several unanswered goals and dominating until the final buzzer. The Friars won the 2021 Pennsylvania State Cup Championship doubling up their adversary the same way dad's team did in 1990. What makes this particular season so special is that 2 generations of Jacobs brothers, the first being Jim and Michael Jacobs and the second Jim's son's, Jimmy and Jeremy all can claim ownership of the AAA Flyers Cup prize, their names etched into and immortalized on the plaque affixed to the multi-tiered Flyers Cup trophy. It isn't common to see such a feat, but the fact is it's happening twice. Team Captain Ryan Sambuco also celebrates the accomplishment with his father Chris who won the trophy teamed with Michael Jacobs at Monsignor Bonner. Two unique records, while one other is solely held by Jim and his son's. They're the only father/son's to have won both the AAA Flyers Cup and Pennsylvania State Cup AAA trophies to date. Congratulations to everybody for their accomplishments! 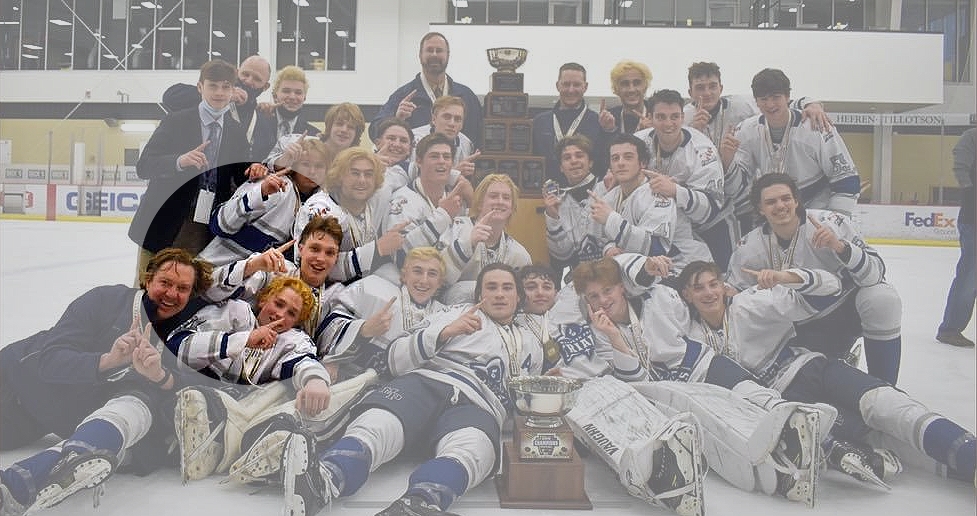 Jim, Jimmy, and Jeremy posing for the PA State Cup Team photo
Did you miss the tournament?
You can view all of the games, box scores and photos from the 2021 Flyers Cup Tournament here, Malvern Prep Friars Flyers Cup History