LIONS AND PRIDE FINISH AT A STALEMATE IN AN UGLY ONE 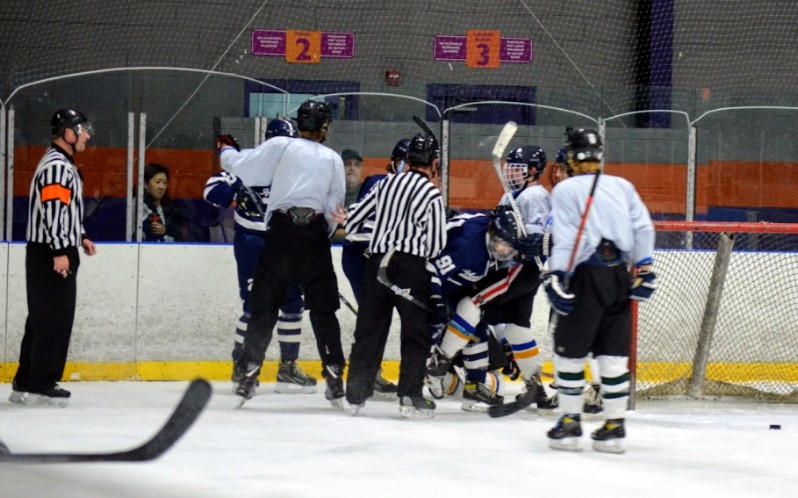 PSU forward Charlie Haddick mixing it up after the whistle in the Widener goal crease.

You won't see it on the score sheet because many calls were not documented but take my word for it, this game was as penalty riddled as it gets. The Lions played the second period virtually shorthanded.

ASTON, PA. - An action-packed weekend of talented college hockey came to an end this Sunday morning. The Lions faced off against the Widener Pride in their fourth and final game of the showcase. Widener ice hockey, a program well known for its customary over-the-top physical play wouldn't disappoint.

Par for the course, Widener came out hitting anything and everything that moved, regardless if a puck was in Lion's possession. Their hit first, play hockey later mentality resulted in a never-ending parade to the penalty box for both teams. There wasn't really any tempo to this game, Widener didn't appear to have a game plan, their strategy was more or less playing not to lose, dumping pucks out of their own zone consistently throughout the entire game. There were no breakout or set plays, every time they touched the puck they fired it out of their own zone and chased it down like a dog fetching a stick. 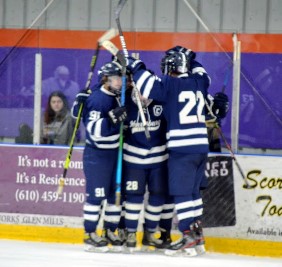 Moore scores to tie in final minutes of the game
The game started with both teams tied up mainly in the neutral zone kicking the puck back and forth working to create offensive opportunities. Granted this was an 8:30 am game with both teams finishing late at night the prior evening. The boys appeared to be experiencing fatigue from 3 straight games in less than 36 hours and that would make sense because this type of schedule isn't common for college hockey. The Pride squad got on the board first scoring almost 9 minutes into the first period. The Lions would not counter and went into the second period trailing 1-0.

The second period can be defined as nothing short of a disaster from a reffing and stoppage perspective. They called pretty much everything a penalty which resulted in numerous Lions heading to the box, and the Pride capitalized on those opportunities scoring two more goals and extending their lead to 3-0. In conjunction with the non-stop penalties, the Pride goalie kept the game in check whenever the Lion's offensive attack entered the zone by kicking the goal post off of its moorings. Nate Feaser scored a goal off of a "behind the net" pass from Jeromy Porubski but the ref called the play dead because you guessed it the goalie pushed the net off, (watch). Though the puck was in the back of the net when the goalie moved it, the ref still called the play dead.

DJ Noss finally got the boys on the board on a power play with little more than 3 left to play in the second. Tommy Olson found Noss sneaking in from the point and fed him for a one timer off of the far post giving the Lions their first goal of the game. Two minutes later, again on another power play, Jake Petras won the left side draw back to Jeromy Porubski who slid the puck over to Kyle Jenkins. Jenkins ripped a seed from the point glove side high past the screened Widener goalie. The second period would end 3-2 with the Lions down one. The third period wasn't much better than the second with respect to penalties, the steady stream to the box continued and at this point in the game the Widener bench looked gassed. The Pride scored again four minutes into the 3rd extending their lead to 2, making it a 4-2 game. However, the Lions weren't done yet. Charlie Haddick pumped in their third goal of the game off of a beautiful between the legs pass from Jake Petras in front of the Pride net. Two minutes later, the Lions found themselves,....... on the power play, who would've guessed?!!! And Cameron Moore would make Widener pay dearly. After several missed attempts, Charlie Haddick found Cam wide open at the right circle hash mark with a gigantic chunk of top-shelf real estate staring him in the face. Moore wouldn't disappoint either, taking the opportunity to go bar down tying the game at 4-4. The game would end tied at 4. Penn State got out of dodge with 2 wins, 2 ties, and no losses.
YHI NEEDS YOU TO WRITE POST GAME NEWS!