Colmar, PA. - The North Penn Knights and Souderton Indians faced off in a preseason scrimmage last night at Hatfield Ice. There isn't really much to say when it comes to preseason scrimmages, as traditionally it's not so much about the wins or losses, it's more of an opportunity to see where the players are mentally and physically after almost two months of preparing in camp. Most, if not all of the players have been playing regular season games at the club level, so perspective comes into play when coaches review how the players execute their game plan. However, for the Knights, it's a little different. Because of covid, the past two seasons have been marred with various restrictions which posed obstacles leading to bumpy and unexpected team play. The inability to convene as a group and interact with one another does play a big part as hockey is the ultimate team sport and requires such finer points for players to gel. This season there are no restrictions, the players have been working out hard as a group tuning their gameplay and are showing signs of a commitment to one another that hasn't been there over the past two years. If last night's play is indicative of what to expect for the 2022-2023 season, it appears then that the Knights hard work is paying off and they're ready to start the regular season. 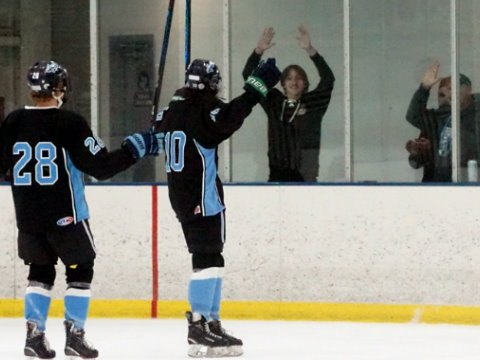 Matt Yothers celebrates his second goal of the game

North Penn came out strong, outshooting the Indians by a slight margin of 13-11 in the first period. While both teams moved the puck back and forth in a feeling-out process, it was the Knights who got on the board first. Julian Ma connected off a pass from Cole Pluck inside the Indian's hash marks above the paint. Pluck fed Ma who tapped the puck in behind goalie Noah Connor striking first and putting the Knights up 1-0. Shortly thereafter Matt Yothers practically duplicated the play's first goal taking a pass from Julian Ma, and quickly depositing it behind the Souderton goalie. North Penn goalie, Nick Crist saw minimal activity from the opposition throughout the first period as a combination of Knights's strong defensive play with a team effort on the back check held Souderton's potent offense at bay.

In the second period the Indians got on the board almost immediately capitalizing on a power play opportunity. Forty-eight seconds in, Seth Grossman found Jacob Chow on the far side post. Chow wasted no time flipping the puck past the Knights Crist, and the lead was cut to one goal. the Knights then took over control pacing the tempo with multiple shots on the Souderton goalie until midway through, Tyler Porubski took a shot that careened off of the dasher boards directly to Nolan Shingle who found Matt Yothers streaking through the slot, Yothers whipped the puck past Connors, blocker side opening the Knights lead to 3-1. That margin wouldn't last long as the Indians went on another powerplay, off of a right-side draw Matt Malanga sent a cross ice pass to Liam O'Neill who bumped it over for the tap in to, Jacob Chow, for his second of the night. The score remained the same, 3-2 as the second period came to an end with the Knights up in shots with a 29-24 advantage.

Both teams traded offensive opportunities in the third period almost shot for shot until the end with just over twenty seconds left to go. Jacob Chow picked up a loose puck in front of the North Penn net and scored forcing the game into overtime. Regulation time ended with North Penn holding a slight margin over Souderton in shots 38-35. The OT period went back and forth with wide open three on three play when the Indians picked up a penalty with one minute and eleven seconds to play. John Stinson faced off winning the draw inside the offensive zone, unchallenged he skated in from the corner and roofed the puck to win the game. 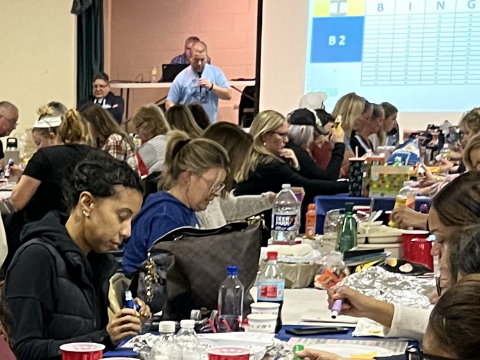 The North Penn Knights held their annual bingo fundraiser last Friday night at the Towamencin Firehouse banquet hall. Apparently their guests missed this event for the past couple of years. It was a huge success with turnout exceeding expectations. All had a great time and all proceeds benefit the Knights hockey club.