One South Beats Another in a Hard-hitting Contest at Hatfield

One South Beats Another in a Hard-hitting Contest at Hatfield

A scrum in front of the Council Rock Golden Hawks goal. 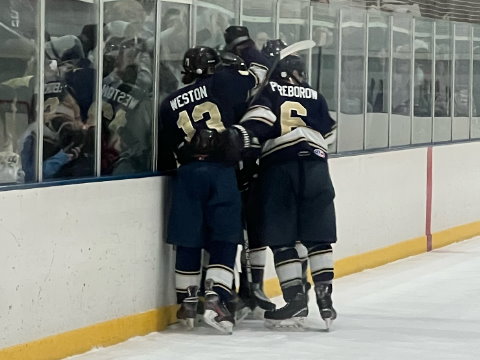 COLMAR, PA - Always a rivalry, this Council Rock South versus Central Bucks South matchup did not disappoint the one hundred or so fans who came out to Hatfield Ice Wednesday night. The action was back and forth, with intensity throughout and hitting enough to please even the most old school hockey fans.

The Titans would start the scoring just two minutes in as Ryan Frey was allowed to walk out from behind the Council Rock net and get a stuff attempt on Hawks goalie Carson Lopez, who made the initial save. Amazingly, Frey was allowed to get his own rebound unchallenged, this time chipping it past the goalie for the all-important first goal of the contest. However, before the Titans could even take advantage of the momentum, the Hawks would answer. Kevin Koles would take a shot from the slot which was deflected in front of the crease by Blaize Pepe, causing Titans goalie Dominic Varacallo to lose sight of the puck. Varacallo was helplessly frozen as the puck flipped over his head and into the net, tying the score at one just 15 seconds after the Titans had taken the lead. Council Rock would turn up the pressure and control the play, and seemed to score again, but the referees did not see the potential goal as Varacallo quickly pulled the puck from behind the goal line, the refs vision blocked by players in front. Unrelenting, Council Rock would beat Varacallo again when Chase Tovsky would capitalize on a Titans turnover, slinging a turnaround wrister from the high slot into the cage.

A great forecheck would lead to another Hawks goal when Jimmy Diiulio, playing his first game of the season, would pounce on a loose puck during a net-mouth scramble and get his first of the year. The period would end with Council Rock in control after outshooting Central Bucks 24-6.

The Titans looked winded to start the second period and Blaize Pepe would make a great individual play off of an offensive zone face off, tapping the puck through his opponent and driving a quick shot past a stunned Varacallo. At this point it seemed like the rout was on, but the Titans would have other plans, and would chip away at the Hawks lead, taking advantage of the few chances they would get, scoring the next two goals to make it a one goal game. First it was Sean Cutter scoring after Lopez made several saves from in close, the puck bouncing about the edge of the crease. Cutter would knock the puck out of the air and bounce it past the helpless Hawks defenders. Then it was Matt Crouch with a simple shot from the high slot that Lopez never saw due to a Titans player standing right in his face. Just like that, Central Bucks had some life going into the third period despite being outshot 14-12.

With the action noticeably slower in the third, and the two teams seemingly tired from the pace of the first two periods, the play would go back and forth for the first half of the third period with no scoring. The Hawks would get some breathing room when a shot from the high slot by Peter Pereborow seemed to be tipped in front by Jake Weiner and found its way past Varacallo. Pereborow would get credit for the goal, his first of the season. On their next shift, the Weiner, Diiulio and Illia Muhkin line, which worked hard all night, would put together another great forecheck and Weiner would score with a nice shot along the ice that just made it inside the post, past the outstretched leg of Varacallo making it a 6-3 lead for the Hawks and taking the wind out of the Titans sails. The Hawks weren’t done however, as the very next shift Pepe would finish a beauty of a tic-tac-toe play with Tovsky and Gavin Niszenson. The game seemed to be in hand for the Hawks, but the Titans would continue to fight and, with the help of a late power play, give Lopez his toughest action of the night. The Hawks goaltender would shut the door with some of the great saves Council Rock fans have been accustomed to, leaving the final score at 7-3. The game was much closer than those numbers would suggest and for the enthusiastic fans in attendance it was another entertaining contest as the Golden Hawks would remain unbeaten to start their season with their third win against a tough Central Bucks squad.