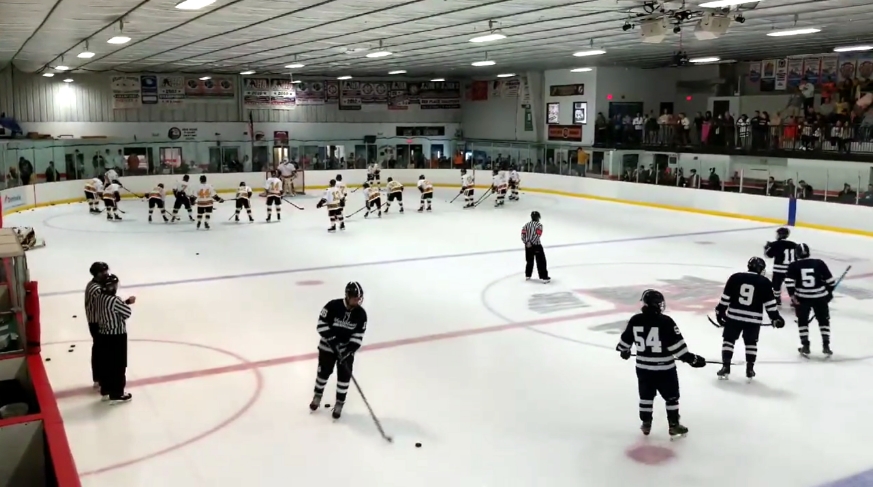 Away game against Millersville played before a full house

It's still the pre-season for the PSU Harrisburg Lions but they're getting their money's worth playing top teams across the central and south eastern part of the state while fine tuning their game plans.

LANCASTER, PA. - Live from Lancaster Arena, the Harrisburg Lions took on the Millersville ACHA D2 Marauders for the Marauders season opener in non-league action. While this Marauder team will not be in-season competition, the opportunity for the boys in blue to play a higher level team gave them the chance to measure their competitive level.

The Lions, looking to set the tone early unloaded shot after shot on the Millersville goalie testing him often. Roughly five mins into the first, Lion forward, Charlie Haddick went end to end with an inspirational, individual effort before unloading a shot from the top of the offensive right side circle. Haddick picked up the initial blocked shot and quickly wrapped the puck around from behind the net scoring the first goal of the game. Shortly thereafter Cam Moore looked to widen the gap splitting the defense before going in one on one with the Marauder netminder. Moore went blocker side high and it appeared the shot had gone in but the refs declared "no goal", (watch). Moments later the Lions went onto a powerplay and this time Moore would not miss, finding himself unimpeded in front of the net, Moore picked up a rebound off of a point shot from DJ Noss. Moore backhanded his shot beating Mathieu Schroeder glove side high widening the gap to a 2-0 lead which would carry over into the second period. 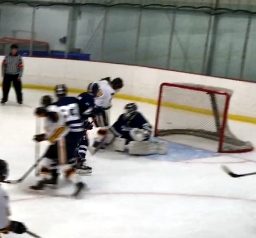 "Hanek virtually shut
down the high -
powered Marauder
offense."
The Lion's barrage of shots would continue through the second period as they unloaded twenty-three to Millersville's thirteen. However, Millersville provided the only goal, netting their first and closing the scoring gap to one. The Lions continued to control the tempo of the game as Millersville countered with physical play in an attempt to settle and slow the game down. The score would remain 2-1 heading into the third.

The teams entered the third trading shots and body checks before Cam Moore struck again. Millersville took two poorly timed penalties giving Harrisburg a five on three power play. The Lions controlled the puck inside the Millersville offensive zone for almost a minute peppering the goalie with several attempts before Charlie Haddick picked up the puck and drew two Marauder defenders leaving Moore wide open. Haddick dished over to the unattended Moore who made quick work of the play depositing the puck into the back of the net to extend Penn State's lead 3-1. Later in the period, Carson Sands picked off a Millersville defensive miscue at their own blueline. Sands picked up the loose puck and skated in one on one firing the biscuit glove side high. The initial save was made but Sands stayed with the play and flicked the rebound behind the goalie denting the twine to blow the game open with a Lions 4-1 lead. Millersville called a time out with less than 4 minutes to play, a desperate attempt to regroup and mount an offense to tie the score. The Marauders would score two more in that time but it wouldn't be enough to even the score. The Lions won in regulation 4-3.

Not mentioned in this article is the play of Lion's goalie, Logan Hanek. Hanek virtually shut down the high-powered Marauder offense throughout the game with flashy glove saves and acrobatic "Dominic Hasek-esque" crease work. Hanek was a wall, frustrating the potent opposition attack all night long. To say Hanek's work speaks for itself is a vast understatement, he was phenomenal. YHI NEEDS YOU TO WRITE POST GAME NEWS!