SEPA High School Ice Hockey History | Archived SHSHL Games
The SHSHL Digest will serve as a resource posting all SHSHL news and information which relates exclusively to the "Suburban High School Hockey League" and its participating clubs and associations, including all information pertaining to Varsity Ice Hockey at all levels and divisions.


WE NEED POST "VARSITY" GAME WRITERS!
ALL OF OUR CURRENT WRITERS ARE PARENTS!
If you're an aspiring journalist, involved in broadcasting or any other form of media related education, here's your chance. Your post game analysis and news reports will be shared publicly on the website and social media. You can share with your friends and family, and use toward your college portfolio. You don't have to be a professional or a student either. Parents and siblings can also provide news reports.
CLICK FOR DETAILS!

Hawks Topple Titans on the Strength of a Four Goal First Period: We’ve seen it many times before, getting an early lead can be poison for a hockey team. When Council Rock South went up four to zero after the first period, they probably thought the game was in the bag.
Keywords: Council Rock South, Central Bucks South, SHSHL hockey news
READ MORE
1/27/23 -

Rams embarrass Knights with with a stampede of goals in a mercy rule decision: The headline says it all, the Pennridge Rams came to play last night, (as they always do) and the Knights didn't. This definitely wasn't a game of attrition by any means as...
Keywords: Pennridge Rams, North Penn Knights, SHSHL hockey news
READ MORE
1/25/23 -

10/18/22 - KNIGHTS ICE INDIANS IN OT: The North Penn Knights and Souderton Indians faced off in a preseason scrimmage last night at Hatfield Ice. There isn't really much to say when it comes to preseason scrimmages, as traditionally it's not so much about the wins or losses, it's more of an opportunity to see where the players are mentally and physically after almost two months of preparing in camp.
Keywords: Souderton Indians, North Penn Knights
READ MORE


WE NEED POST "VARSITY" GAME WRITERS!
If you're an aspiring journalist, involved in broadcasting or any other form of media related education, here's your chance. Your post game analysis and news reports will be shared publicly on the website and social media. You can share with your friends and family, and use toward your college portfolio. You don't have to be a professional or a student either. Parents and siblings can also provide news reports.
CLICK FOR DETAILS!
10/14/22 - North Penn Knights Ice Hockey Fundraising Event Is Back!: LAST CALL!!! Looking for something fun to do on this dreary October Friday night? Why not come out and support your favorite Knights Ice Hockey players?
READ MORE
10/11/22 - The Suburban High School Hockey League American Division Preview: Head Coach Ken Brzozowski and his staff are poised to get the 2022-2023 Suburban High School Hockey League season underway as the Abington Ghosts, (12-0 league play and 16-2 overall) return a heavy lineup of upperclassmen...
READ MORE
10/8/22 - The Suburban High School Hockey League National Division Preview: In less than one month the 2022-2023 Suburban High School Hockey League season will commence play. Before getting started let's take a look at each team.
READ MORE
10/6/22 - Celebrating 50 Years of Suburban High School Hockey: The Suburban High School Hockey League is celebrating its 50th season, a jubilee of a half century of successful high school ice hockey in the Bucks and Montco region. 50 years ago, Ray Reinl, (the original owner of Wintersport Arena) had an idea...
READ MORE
10/5/22 - The 2022 SHSHL Season Set To Begin In One Month!: This season should be pretty exciting as the Pennridge Rams will look to defend their extraodinary accomplishments from the previous 2021-22 campaign. The Rams completed a near perfect season with only one blemish, a 3-3 tie to the CR South Golden Hawks at the end of their season schedule.
READ MORE
10/4/22 - SHSHL brings back 2 division alignment for 2022-23 season: Let's rewind the clock twenty-five years and teleport back in time to 1997. John Ioia and his Germantown Academy Patriots are destroying the SHSHL. Paul Gilligan's Council Rock Indians are their perennial nemesis, and William Tennent is seeing legendary coach, Joe Paul make a return behind the bench after a three-year hiatus.
READ MORE 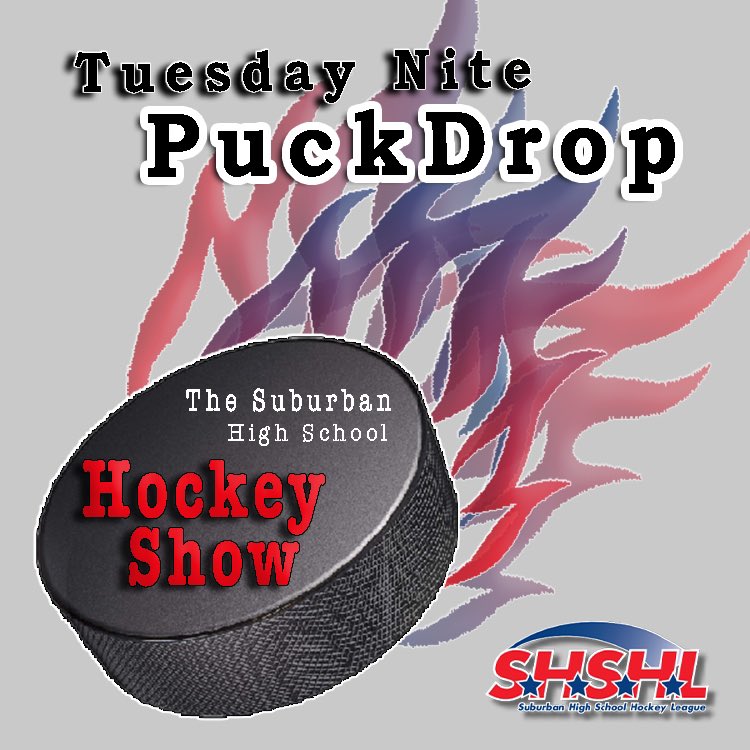 TOP TEAMS
TOP PLAYERS
TOP GOALIES (WINS)
*Please remember to check with your teams regarding spectators. All games will be broadcast on SHSHLTV.com, and Livebarn by subscription only.
Viewing Options
SHSHLTV.com
LiveBarn - *Only available at Hatfield
condensed season schedules here SHSHL Participating Rink Capacity Limits!
Be sure to check the rink guidelines on a regular basis to ensure spectator limits have not been changed. All are subject to change at a moments notice!
WE NEED POST "VARSITY" GAME WRITERS!
If you're an aspiring journalist, involved in broadcasting or any other form of media related education, here's your chance. Your post game analysis and news reports will be shared publicly on the website and social media. You can share with your friends and family, and use toward your college portfolio. You don't have to be a professional or a student either. Parents and siblings can also provide news reports.
CLICK FOR DETAILS!
2020- 2021 SHSHL SEASON REMINDERS!
Here are a few reminders as the season approaches:
1. Your Website Roster and Scoresheet label must match. The USAH Roster and Matrix must list all players for the player's primary team. Swing players should only be rostered on the lower team's USAH Roster & Matrix. Players may not skate in a game unless listed on your Website roster and Scoresheet label as well as a USA Hockey roster and matrix.
2. The home team pays both referees during the regular season.
3. CHANGE! - The home team will provide two volunteers to do the timekeeper and scorekeeper in the scorebox for every game. The away team does not need to provide anyone.
4. The home team is responsible to e-mail the league a copy of the scoresheet after the game, please e-mail to [email protected]
5. Game results need to be entered online with 24 hours. 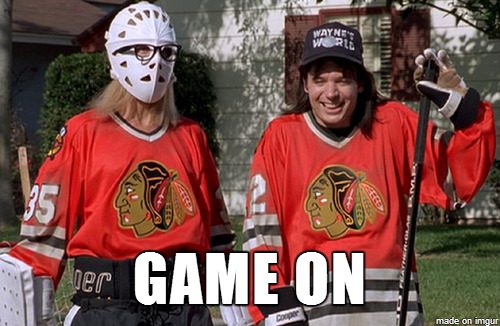 GAME ON! Teams are reporting to practice and the first Varsity game of the 2020-2021 season will be between the Souderton Indians and Quakertown Panthers. Good luck to all teams and have fun! You can view the condensed season schedules here

SHSHL Season Pushed Back To 1/1/2021 With the latest decision from the Montgomery County Board of Health to shut down Montco hockey rinks, the SHSHL has decided to push the season to at least January 2021. Don't place any bets. 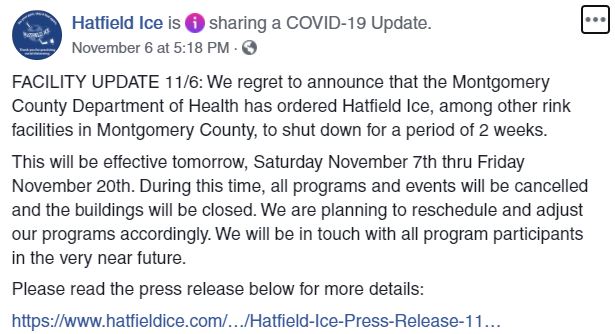 Montgomery County Ice Rinks Ordered To Close! 11/9/2020 Effective Friday Novermber 6th, the Montgomery County Board of Health strongly suggested rinks close at their behest or risk further injunction. What is the cliche', "and so it begins"? We now enter into the see-saw phase of covid-19 shift on the fly judgement calls which will effectively be controlled by our county politicians. Anything can happen going forward, including a complete shut down and cancellation of the season. Stay tuned.     Hatfield Ice New Player Guidelines 11/9/2020 Beginning, (tentatively) 11/20/2020 players are no longer permitted to enter the building with their hockey bags, that is, NO HOCKEY BAGS ALLOWED. All players are to come to the rink for practices or games dressed. They may enter the building 20 minutes prior with skates, gloves, helmet and sticks in tow. They are permitted to put their skates on using the benches outside the locker rooms. Existing mask rule, building entry and exit rules are still in effect.
Black Bear LLC Rinks Shut Off Livebarn 11/6/2020 News surrounding rinks owned by Black Bear LLC is making the rounds again. Numerous complaints are rolling in on FB from angry parents who pay the monthly service in order to watch their kids play remotely due to rink occupancy restrictions. Emails from customers to Livebarn are met with a response informing them, "Livebarn support has no control over how rink managers control their camera's". We've been informed parents have reached out to Grundy rink management and have been told the cameras are off and they're not going to be turned back on. Some have said they have also experienced the same at Revolution Ice Gardens in Warwick. 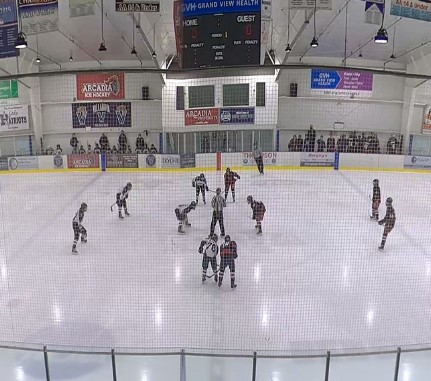 Patriots Faceoff Against Rams In Pre-Season Scrimmage: Last night two accomplished league favorites faced off to kick off the 2020 SHSHL pre-season. Both teams looked to shake off the rust in preparation of the 2020 SHSHL regular season. Check out the box score and full game replay - CB East Patriots (6) vs Pennridge Rams (3)     CR South conclude tryouts last night as the CB West Bucks begin theirs SHSHL website news! The site is currently being updated with the participating teams at each level. As rosters become available, we'll update accordingly. SHSHL Tentative Start Date: Wednesday November 25, 2020, High School Varsity Rivalry Night. All of the familiar regional rivals will match up against one another for their 1st games of the season. Rivalry night is normally about 3 weeks into the regular season but due to COVID-19 the league was forced into making adjustments in order to accomodate restrictions. Slowly but surely limitations are being modified and hopefully the league can start on target as projected.
SHSHL 2020 Varsity Team Rosters The website is being updated as some of the participating schools are still registering for tryouts, in the process of tryouts, or have recently completed. Updates will be posted as rosters become available. 9/2/2020 - HIGH SCHOOL HOCKEY IS BACK, for now!

On Monday night, 8/31 the SHSHL board and associated participating membership reps voted unanimously to proceed with team related activities such as evals and practice, competition will remain on hold

There are 3 possible scenarios to begin the season, all are contingent on occupancy limits being extended beyond the existing 25 person max. The AAHA is currently in discussions with state congressional officials on a compromise.


Where any of this goes remains to be seen, however it is good news nonetheless. As is the case, the situation is fluid and is subject to change at a moments notice. Any new information which becomes available will be updated accordingly.
SHSHL Voting Results - Proceed or delay interscholastic sports activity?
Voting is now closed and according to the results it's quite clear the majority of votes are in favor. Click or tap on the image below to view discourse.

10/15/2019 - SEASON REMINDERS
Here are a few reminders as the season approaches:

With the new rule in place, the home team will be responsible for handling both the clock and the score keeping duties. It is each club or associations responsibility to share the announcement with their teams respectively. Each team rep for all levels .... READ MORE 10/2/2019 - SHSHL division alignment has been released. Some big news follows.

The Upper Dublin Cardinals have chosen not to ice a team in any division this season. Therefore the Truman Tigers will move down from AA to A and will fill the gap. The Quakertown Panthers are back for 2019 and will skate in the Continental AA division. While the Council Rock Indians emerge from playing independent in 2018 to also skate at the AA level in the National division.